The last year of lockdowns has had a profound impact on the way our children learn. With schools closed for the majority of the year, online and distance learning has become an integral feature of daily school life. Even before then, technology had been playing a much greater role in our children’s education than ever before with resources such as interactive whiteboards or even pupils’ phones adding an extra dynamic to classroom learning.

From practical advice for both teachers and students to hilarious classroom antics and commentary on school life, these teacher accounts are well worth a few viewings. With large followings on platforms including Instagram, Tiktok, YouTube and Twitter, we’ll be taking a look at some of the biggest names in this growing social media niche.

The world’s most popular teachers

Looking at four different platforms, we have found the teachers with the biggest social media presence and have calculated their earnings per social media post: 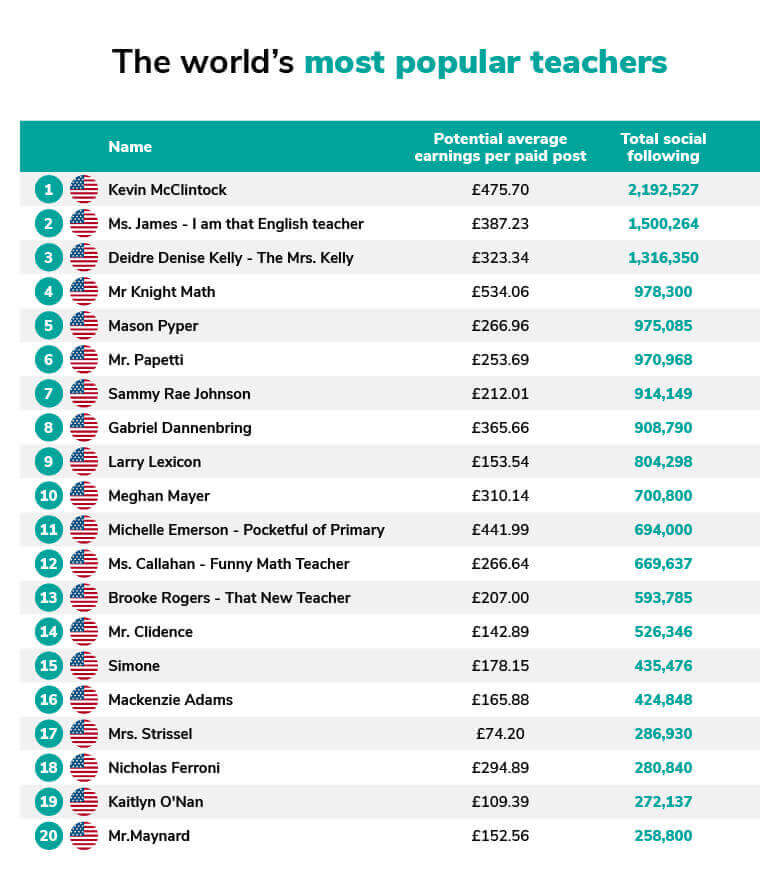 The overall winner, having amassed a colossal social media following of approximately 2.2 million followers is Kevin McClintock. He’s taken TikTok by storm with his hilarious and feel-good content earning him 2.1 million followers on this platform alone. 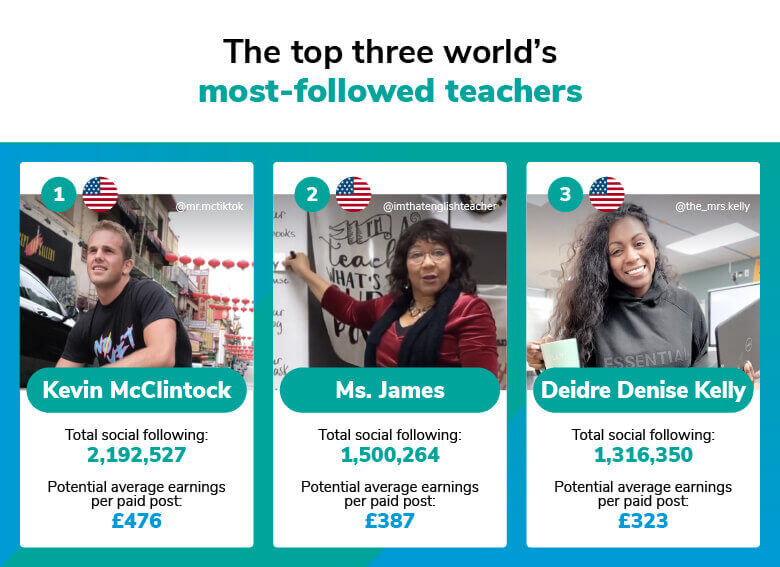 In second place is Ms. James, an English teacher whose content provides bitesize lessons around grammar and key topics in the English language. Her lessons are extremely accessible, and her friendly and positive teaching style has won her TikTok account “iamthatenglishteacher” 1.5 million followers.

Coming in third is maths teacher Deirdre Denise Kelly, another popular TikTok teacher with 1.3 million followers on the platform. In her videos she breaks down all manner of maths problems from fractions to cross multiplication, and her “Teacher ASMR” TikToks are a big hit.

If you’ve ever wondered what would happen when rap meets maths then look no further than Mr. Papetti whose videos left us both in stitches and more confident with numbers. 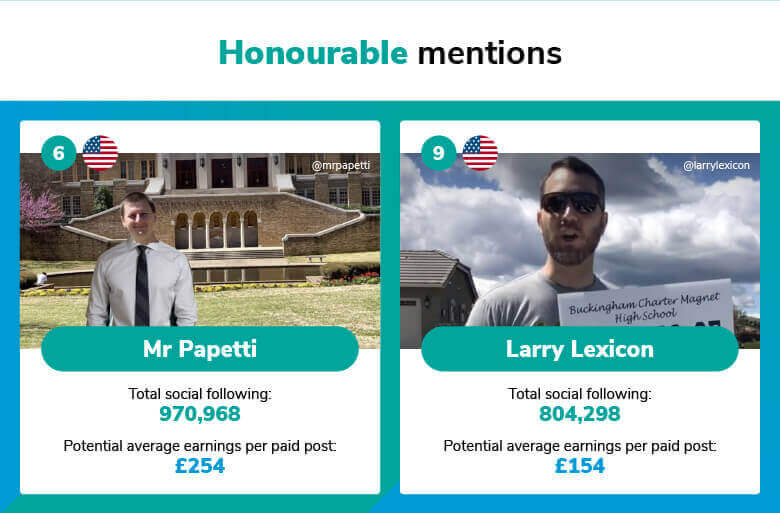 On the other hand, Larry Lexicon’s no-nonsense grumpy demeanour is almost a breath of fresh air in the sea of positivity that is social media teachers. His hilarious content is well worth checking out and earned him enough followers to take ninth place on our leaderboard.

The UK’s most popular teachers

The phenomenon of teachers on social media is a bit newer here in the UK, but there are still plenty of home-grown accounts out there to follow. Here’s our list of the UK teachers with the biggest social media following and their estimated earnings: 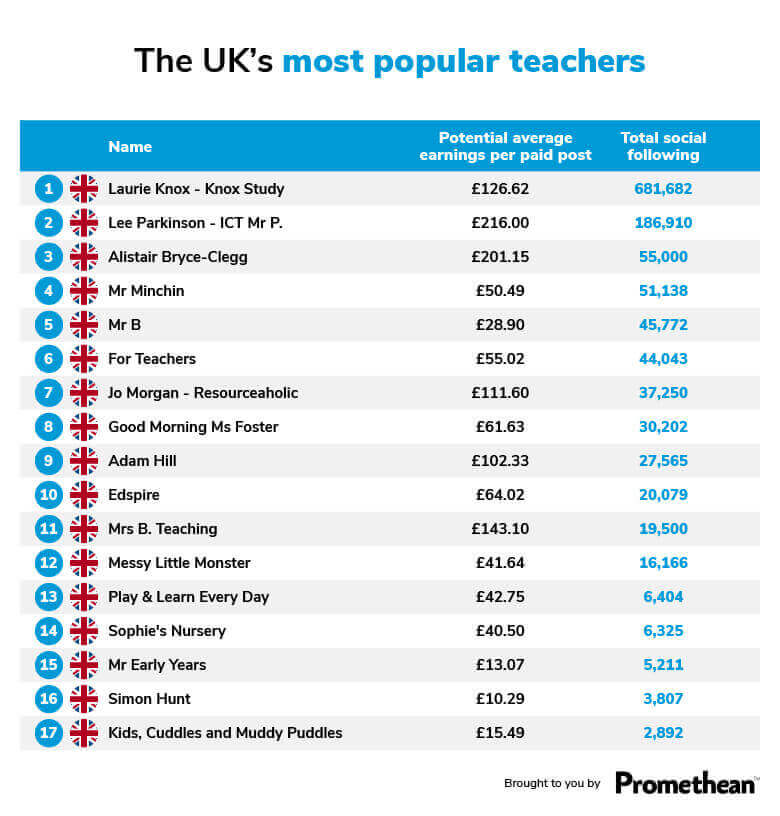 The most followed UK teacher on social media is Laurie Knox of Knox Study. Laurie teaches English as a foreign language and his channels are full of interesting linguistic facts and trivia, all with a sprinkling of comedy and entertainment. He’s active across each of the four social media platforms that we looked at, but is most successful on TikTok where he has amassed over 675,000 followers.

Leading the way on Instagram is Lee Parkinson whose account @ict_mrp has attracted 74,900 followers. His main aim is to impact the way in which teachers use technology in the classroom, raising standards and outcomes for students. His account is a mix of inspirational and entertaining content and in our opinion is well worth a follow.

The most popular teacher on TikTok

The biggest UK teacher on TikTok is our overall winner, Laurie Knox. He’s one of the few UK teachers to make full use of TikTok and is doing so with great success, having accumulated over 675,000 followers on the platform.

With almost 35,000 subscribers, Thomas Blakemore is the UK teacher with the biggest following on YouTube. Thomas is an English teacher currently working in Dubai teaching English to children who are non-native speakers. His videos are both entertaining and highly informative, covering topics from general tips to managing teacher workload and advice on teaching in the UAE.

The teacher with the most followers on Twitter is Lee Parkinson, whose account is followed by more than 50,000 others. Like on Instagram, he uses this platform to promote better use of technology in schools, while also providing some entertaining content to get us through the day.

We used several online calculators to estimate the amount that each teacher could potentially earn for a sponsored post on each platform. We then calculated the average earnings of a social media post for each teacher across each of the platforms that they use.

Blog
The classroom guide to interactive whiteboards: what they are and how to use them
Learn More