A good education is one of the cornerstones of our lives and our society. When parents send their children off to school, they trust that they will receive a high level of education. It is so important that we have a government body dedicated to maintaining high standards in schools across the UK.

The Office for Standards in Education (or Ofsted) inspects and reports on schools, grading them as outstanding, good, requires improvement or inadequate, based on a range of factors.

We looked at the most recent Ofsted reports from public schools, excluding trusts and private educational establishments, as well as reports from the previous report date to see where schools are improving and where they are not.

The areas with the highest rated schools

The London boroughs with the highest rated schools 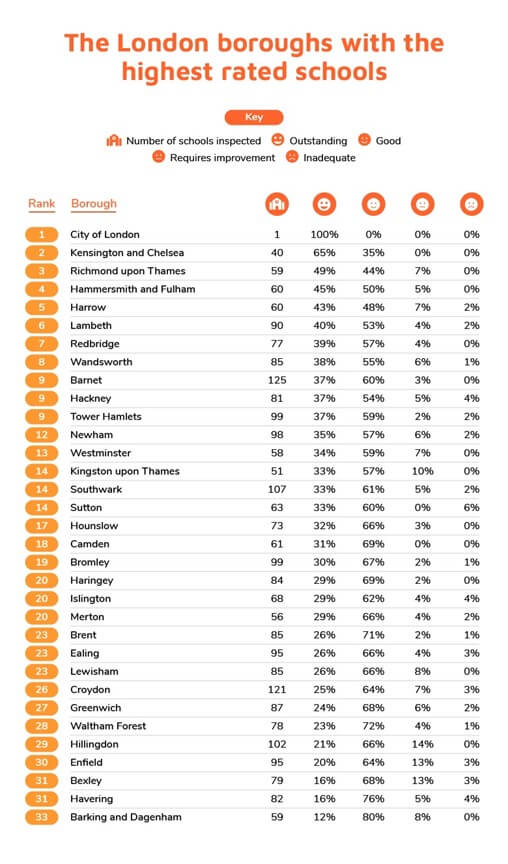 The areas where schools are improving most

By assigning a score from 1-4 for each Ofsted rating we were able to give a total score for each area for the two time periods. Comparing these two scores, we can calculate the overall difference to discover where schools are improving and raising their rankings.

The London boroughs where schools are improving most 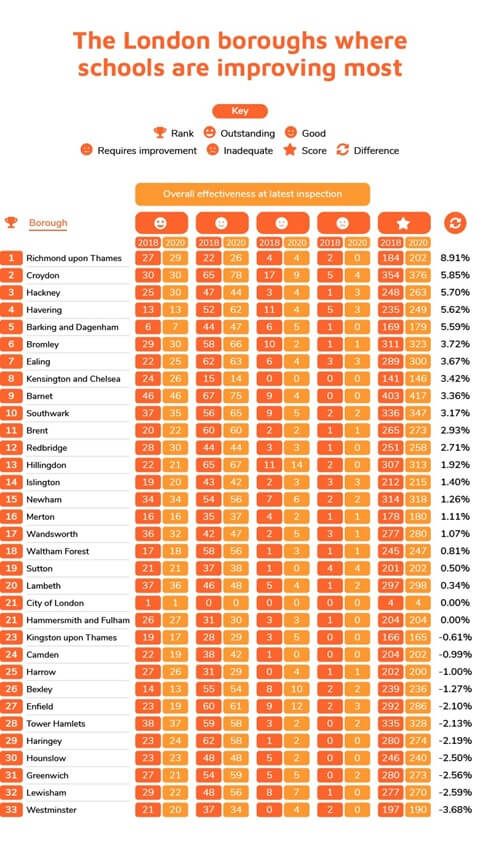 The areas with the highest spending on education

Schools rely on funding from their local councils so they can offer a high quality of resources in order to give children the best education. When we look at the funding set aside for education in each area, compared to the number of schools, we can see how much money is available if that money was divided equally between each school. The following figures were sourced from the government website’s collection on Local authority revenue expenditure and financing.

Council expenditure on education is taken from the official government website.

Ofsted ratings are taken from the official government website also, giving the outcomes of school inspections as of 31st March 2021 and comparing them to the most recent previous inspections.

When looking at the most improved areas, we assigned a score to each ranking, outstanding equalling 4, down to inadequate equalling 1. This allows for schools to be compared to one another, yet does not account for the possible variation between schools with the same Ofsted rating, for example in terms of performance or student experience.

A total was taken of these scores in order to give a score for each reporting period in each area. When these scores were compared, we can see hypothetically which areas have seen the most improvement.

In London, Richmond upon Thames is the most improved area for Ofsted ratings, while the City of London spends the most on education, although it only has one public school.

A good education is essential for young learners’ development inside and outside of the classroom. Tools such as interactive displays are designed to increase classroom engagement and optimise learning. The Promethean ActivPanel interactive display brings learning to life in the classroom. With features like device mirroring, screen sharing, unlimited whiteboard space, Bluetooth connection to lab devices and much more, teachers and students will reap the benefits immensely. Let us help you create a fully engaged classroom. Schedule your FREE live demo with a Promethean expert today!