Touchscreens are something that we’re all familiar with, from the smartphones in our pockets to the tablet devices in our homes.

And now, touchscreens are being integrated into school classrooms, too –  providing innovative new ways to transform the classroom learning experience.

We all know how to use them, and we use them every day. But how do touchscreens work?

Keep reading to find out.

The majority of modern touchscreen devices use capacitive touch technology. But it’s by no means the only touchscreen type.

Below we’ll take a look at the different touch screen types in a little more detail, plus we’ll dive deep into Promethean’s in-house touchscreen technology Vellum – a custom solution designed specifically for the classroom environment.

To enable this, the perimeter of the touchscreen has embedded camera-like sensors alongside infrared lights.

As infrared light is projected across the screen, it is recorded by the image sensors.

A touch to the screen interface disrupts the flow of light in the area, registering as a screen touch.

Because optical image touch screens use disruptions in infrared light to locate screen touches – unlike capacitive touch – screen touches can be registered using any object, not specifically needing a finger touch.

Benefits of optical image touch screens in the classroom

Optical touchscreens adapt perfectly, unlike resistive touchscreens that rely on pressure to record the point of touch.. Check out the Promethean 86” ActivPanel Nickel interactive display, for example.

Using enhanced sensors and advanced algorithms, the touch location detection is unrivaled. Allowing for higher levels of accuracy and precision.

With our custom solution designed specifically for the classroom – Vellum – we’re able to deliver enhanced functionality and performance.

Using a non-capacitive screen opens the door for affordable, purpose-built accessories for an enhanced experience. Accessories like the Promethean batteryless pens and erasers that work flawlessly with the touch screen glass to deliver high precision at a low cost. 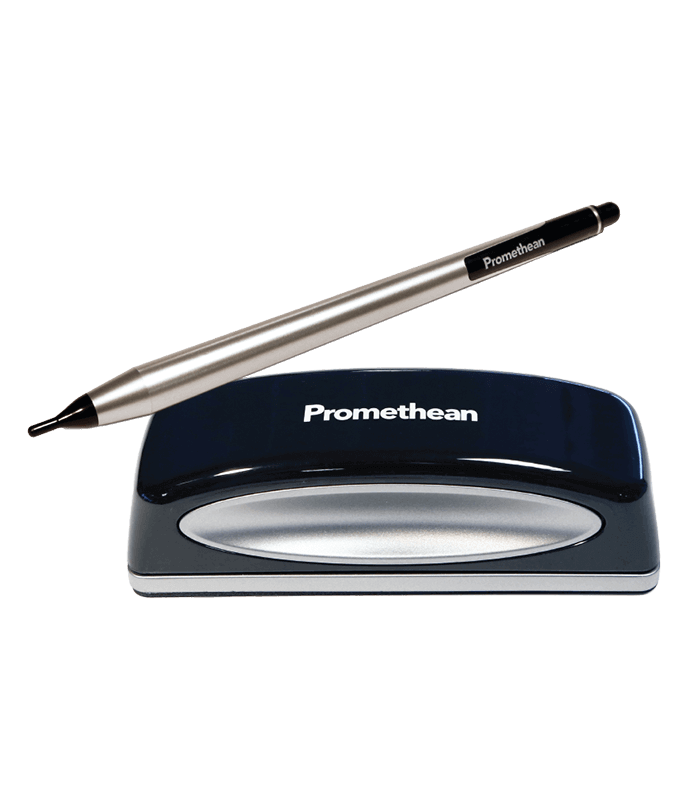 Resistive touchscreens are made from two conductive layers.

The outer layer forms the digital screen, and the underlayer is for buttons.

As pressure is applied to the screen, it bends to create a conductive connection between the two layers, signifying a button press.

The resistive touch is the most primitive form of touch technology.

Infrared touchscreens use light-emitting diodes (LEDs) alongside inbuilt sensors to create an invisible grid of rows and columns that measure the infrared light beamed across the touch screen.

Touches are detected when a finger disrupts the infrared light grid.

Capacitor touch screens are what most people are familiar with in their smartphone devices.

These screens are composed of three distinct layers:

Let’s take a closer look at each layer.

The top layer of a touchscreen device is made from protective, chemically toughened glass (over five times stronger than standard glass) to protect it from scratches and breakages.

How is it toughened?

The toughening is done by soaking it in a bath of potassium nitrate at 400 degrees Celcius.  This process causes the sodium atoms to migrate, to be replaced by the much larger potassium atoms.  And because the potassium atoms are much larger than their sodium counterparts, they create a substantial compressive force on the glass.

Imagine you had a glass bottle with five marbles inside. When you shake the bottle, the marbles have space to move around, making the bottle more likely to break.

Let’s now imagine the same bottle, but this time each of the marbles is much bigger, so big in fact that they touch the bottle sides. Now, when the bottle is shaken, the marbles have no room to move, making it much less likely to break.

Below the toughened glass is a projected capacitive touchscreen that senses the presence of conductive materials such as your fingertip.

This capacitor is made up of three layers.

The bottom grid layer is constructed from a tightly spaced grid in tiny diamond shapes packed with electrons emitting a negative charge across the grid structure.

The second layer is composed of a transparent insulator, pressed tightly on top, which keeps these electrons fixed in their place with nowhere to move.

Now for the top layer.

The top layer is also constructed as a tightly spaced diamond-shaped grid; however, no electrons are present this time.

To balance the negative charge emanated from the electrons at the base layer, the top diamond grid layer becomes positively charged – this is called a capacitor.

How touchscreens work with only fingers

When a conductive material (such as a fingertip) is moved over the capacitor, it changes the electric field, impacting the level of positive charge on the top layer.

This change in positive charge is measured by sensors, registering this change as a touch, giving the touchscreen device its responsive, hyper-accurate way to measure a touch location.

This is how touch screens work using just your fingertips.

What is an OLED?

An OLED is a high-resolution display that generates the high-quality imagery you’ve likely become accustomed to with modern touchscreen devices.

It’s built upon an incredibly intricate grid consisting of over over three million pixels, resulting in over ten million individually controlled dimmable red, green and blue lights – and that’s just in the smartphone device in your pocket.

There’s an enormous amount of complex, state-of-the-art technology going on every time you touch your screen, with the space evolving at a rapid pace.

But hopefully, you now have a much better idea of how touch screens work on different devices and what goes into every screen tap.

Now though, it’s time to put those touch screens to work and implement them into the classroom to reap the many benefits this type of transformative technology can have on student learning.

Interested in learning more? Request a FREE virtual demo from one of our experts today to learn more about Promethean’s touchscreen technology in it’s ActivPanel interactive display!

Blog
Edtech trends to watch out for in 2022
Learn More